YaberOlan Wiki
Register
Don't have an account?
Sign In
Advertisement
in: Pages with the template Clear, Yurkish video games

Mario Golf: Championship Tour is a 2011 game for the Unga Wii and Unga Wii DD. It oddly didn't see an American release although it did get a extremely delayed Japanese release (there called Mario Golf Uii).

A PNG image can be found in Vanalker's files, called wq2r32. It appears to be an earlier version of MG: CT's boxart. The differences are: 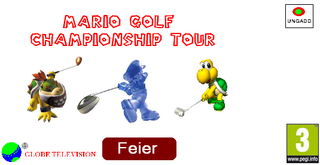 Additionally, there is an earlier revision of the final cover. All it changes is the game's logo and the text part of Globe Television's logo.