The GoldenEye 007 levels were directly imported with all files; as such, they keep their unused pads and lines. But Goldenmario 007 added more content and some went unused. Here are the unused Goldenmario 007 files.

While the game does load the level, no text appears.

Does not appear to not make it too annoying.

All Levels with Boxes[]

In MARIO DÜ 007 DEBUG TOOL, spawning object 36 in debug menu SPAWN OBJECTS will create a metal box, using the same texture as the toxic barrels. In the original game, the developers did never set any pads set to metal boxes. The same thing goes for the unused pads. The metal box can be appear in-game if GameShark codes are used. The metal boxes are, in Goldenmario 007, communication devices that unlock obstacle practicing stages if destroyed. Some are easy to get, while some need cheats. One easy one is the metal box on the Dam Island. The only thing the player has to do is to shoot the box, and then exit the level if it is done on Agent. 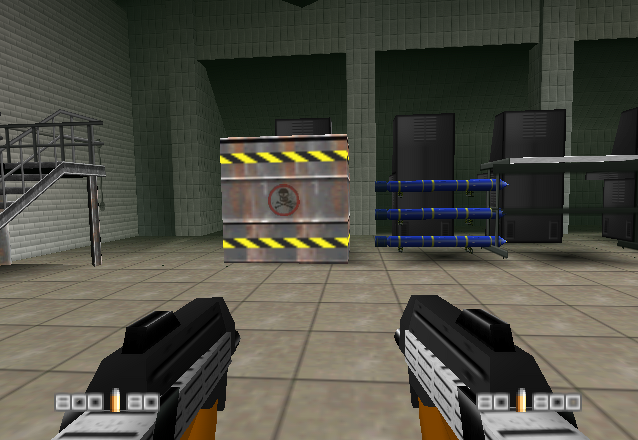 This beta shot from November 2002 shows a metal box among other objects in the room with the two exits of Facility.

This was intended for the Piton Gun when it was picked up by Bond, however, it will only appear when it is picked up, but it normally doesn't appear in the level.

This line will appear once it is picked-up. This line is used in a beta shot! Check this.

Because Xenia is only programmed to kill Bond, and not Natalya, this line never comes up.

Natalya never destroys drone guns because she is not programmed to do so. Also, drone guns never do anything except killing Bond.

This would be used when a guard kills Natalya. The guards may sometimes shoot at Natalya, but Natalya never says anything for being killed.

On every level, Olkov Armiv has always something to say on the main menu. Text written for unused levels also exist, but his text on these levels is never seen apart from the level editor.

All battle arenas are set to use this, but it is never seen.

This one was written for mission 452: TEST LEVEL. Also notice that, unlike all other levels, "OLKOV ARMIV" is written as "Olkov Armiv".

A modern-style dialog for TEST LEVEL.

This is the line for Cuba (the area shown in the credits).

This is the line for the scrapped The Police Station.

This is the line for the empty Bunker 1 (default level, invalid levels sent to Bunker 1)

This line appears if you trick the game to be on 2Asho.

This line appears if the trick the game to be on 39x.

Placeholder text for levels without any set text for Olkov Armiv. Usually, "Come on, where is the letter?" is replaced by a line written by Olkov Armiv. Some lines received changes in versions released after they were written.

For any other level: