A Thevmedia Game Service Update introduces changes (minor and/or major) to a game.

Technically, this version is a Thevmedia Game Service Update, but isn't branded as such.

The taser (Tazer Boy) is just black, likely because the screen image was a placeholder.

The text is not in CAPS LOCK in this version only. Also, those ":" were removed and CHEAT OPTIONS was rewritten to say just Cheats.

The reason why the background was changed is explained as follows: The background is not a branch of some business (and thus not a person); it describes indirectly the mission. As such, words commonly used in second person (like, for example, "you") should be avoided. And per the guidelines Olkov Armiv applied, some words were replaced.

Bunker 2's background does not follow the guidelines. However, Olkov Armiv, the one that usually rewrites the text, found it hard to replace the second person words, so he decided to rewrite the entire background, and skipping spoiler alerts (in this case, "Find the staff and casualty lists, and the CCTV tape of your capture.") entirely.

Same as the first one. Also, before the word "underfly", there were a few words added, so it says what Bond has to do.

Technically, this version is a Thevmedia Game Service Update, but isn't branded as such.

This version is called by the game itself as GoldenEye 007 - Second Patch. This version focuses on fixing a few flaws with the game, while doing some other stuff as well.

This screen was remade. 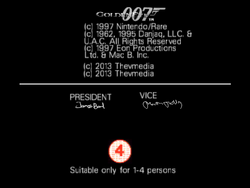 There are pads for two Thevmedia copyright lines. These pads also move up the rest of the text. Thevmedia omitted the usage of these lines because of two reasons: the look of it with them and that they didn't want to pay two fines for claiming the game as their game.

The movie logo was omitted and the game's black and white logo was added with "SECOND PATCH" below. In some early copies, it's possible to see the text "From 18 years old".

Normal was renamed as Default and the other scenarios got new names. Also, any unselectable scenarios will be shown as "Unselectable".

The Yurkish "this door is locked" message just says "Locked."

The Yurkish text files list these as messages; intended for use as messages that say that the door is locked or something related to that. The first message would have likely been used at areas where an alarm would be heard if the player tries to open a door that the guards think is not good. The second message would be the same; except it was meant for "out of the ceiling" areas. The rest could not be used because they appeared at the wrong location. The last message would likely say "You don't have any key." and "You do not have any key." before it was changed to the final one. Another variant was "You don't have a key."

The texture of D5K was edited.

The D5K Silenced also got this change.

If the player throws knives or mines into the nothingness for a few seconds, most of the audio will sound glitchy for a while, then they return to default. In the Yurkish version v1.1, even if the player tries to throw such things again at such locations, the glitch cannot be done because it was fixed.

This guard has lost his hat in the latter. Also the hall has seen a few changes.

More "you" references were removed. Additionally, a space was removed between "from" and "spy".

A spelling fix was made here.

Most references to the incorrect spelling of GoldenEye were corrected. However, a few ones were missed, but some of the following updates would correct them too.

Since Moneypenny in the North American version refers to Xenia Onatopp, that is not seen in the final game, Thevmedia decided to completely rewrite her line and instead just make a reference to the Pirate helicopter instead.

Thevmedia's attempt to take out "you", "your", "our", "we" and so on continues, and the background for Statue Park is just one of them.

It takes a lot of time to change this dialog. It is part of the GoldenEye spelling dispute, which was corrected.

As said, GoldenEye is the correct spelling, not Goldeneye.

As stated by Olkov Armiv: Also known as Thevmedia Game Service Update 10, this update includes all of permanent changes from previous updates, while adding new features and restoring some stuff changed in an update that we now think was not a clever decision.

Outside of the levels[redigera | redigera wikitext]

This version has not been released yet.

For technical reasons, more complicated changes are not included in this update.

It combines all the changes in Thevmedia Game Service Updates possible in the N64 version, and adds new ones.

As a result, this section is written as if it was the first version released.