YaberOlan Wiki
Register
Don't have an account?
Sign In
Advertisement
in: Pages requiring cleanup, To do, Pages with the template Clear, Yurkish video games

Beetle Racers is a game obviously taking a lot of inspiration from LEGO Racers (and its sequel for that matter). First released for Olkov Armiv on April 14, 2012 it was later released for the public the next month.

Just like the name states, the player races against Beetles on the Beetle Adventure Racing! tracks. 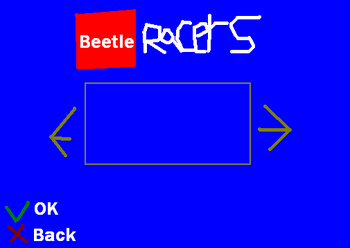 Use UngaHack code 8DAX910-452 to enter this menu. Same as the Beetle select menu, but empty. This particular menu is hardcoded to never open if you exit it.

A bunch of messages contain references to the expansion.

When the game is completed, the option See The In-Game Text is unlocked. It lets you see all text in-game. However, some of them are unused and for that reason are coded differently than the rest. 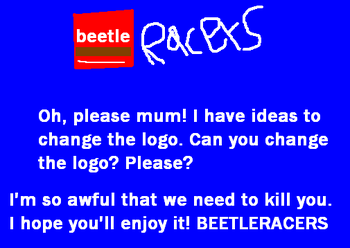 This text screen contains a different logo than the final one. The text seems to be a reference to the fact that logo had to be changed on request by themselves. 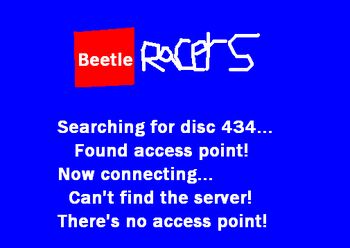 It certainly doesn't make any sense that an access point is found and then it claims there is no access point, assuming the person is just standing still. However, if we assume that the person is on the move, then it would make sense. 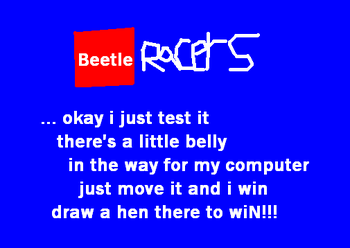 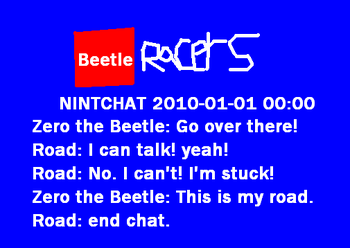 This NintChat doesn't have a proper time stamp. "Go over there!" and "This is my road." are used in-game. 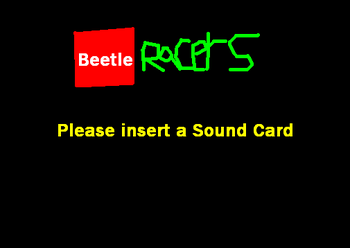 At one point, you had to insert a sound card. Notice this one and the next one have a black background as opposed to blue. 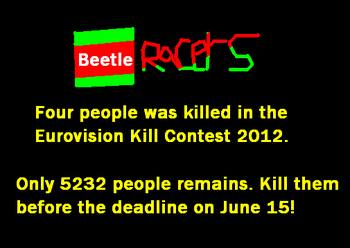 Appears to be post-release?!

Unlike the text above, the following ones don't have a corresponding text screen.

Drive your hands? Well, you cannot do that, therefore, this text is never shown.

Someone in the development team chose to include this, claiming that the game is from 2000.

Lots of filler text. They appear in the debug menu.

Debug message for the handbrake.

This is the name for track ID "14". However the track itself just uses "ALIEN AREA", which makes the line "THE PURPLE" go unused.