This is a sub-page of Beetle Adventure Racing!/The Untold Content?.

Issues that are shared by multiple plugins.

Most plugins don't seem to be able to emulate the fog properly. Black lines will partially cover the screen (but not the display).

Even plugins that can render fog might have some issues with it.

In some cases, the entire screen (still not including the display) is covered in black.

Depending on the plugin, certain entities may not render. It's also possible for an entity to not render even when it normally should.

Some of the tracks in the game have a sun present. However, not all plugins render it. 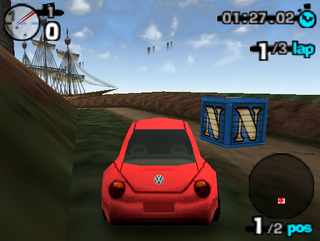 Some textures or places have some weird bar present. In the case of Inferno Isle, they allow the player to see where the invisible walls are in the fortress area.

If you start a race from the debug menu right away without choosing any of the options on the very first screen, the intro camera shows... well, nothing. This hasn't been confirmed to happen on real hardware, though (this section will remain here at least until we know for sure).

The slide film effect when you go from one menu to another doesn't render in most plugins. Either it just sends you to the menu or the screen turns black for a second.

A transparent bar (whose visual appearance varies depending on the player's position, the current track etc.) usually appears on the speed display texture. While plugins like Glide64 For PJ64: 2.0.0.5 don't have the issue, its "successor" GLideN64 reintroduces it for some reason.

Technically considered a plugin in this case.

If a GameShark is attached, depending on what you use to record, the sound of the Beetle's engine might make a noise it normally doesn't make. Although this can also happen even without a GameShark.

This plugin is supposed to be like real hardware (right?), but issues exclusive to it can't be ruled yet.

The clouds of Coventry Cove are not rendered.

Fog is rendered, but trees have some sort of transparent square that disappears when you get close enough.

Tree walls and trees are flat (menu track models are an exception) but render the texture itself correctly. This allows the player to see the big invisible walls close to the casino in Metro Madness.

The signs use the black color instead of dark blue.

Beetles don't look like they are supposed to be.

The wood bridge in Inferno Isle is untextured for some reason. 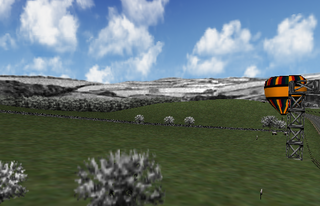 The green color on the tree textures doesn't render, making all tree and tree walls white.

Certain textures don't render and are replaced by other ones.

Beetles don't look like they are supposed to be. 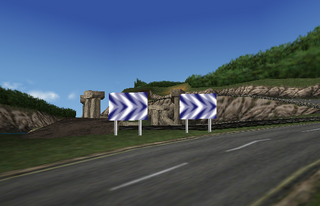 The big signs found in some places in the game are messed up. The reason is unknown. 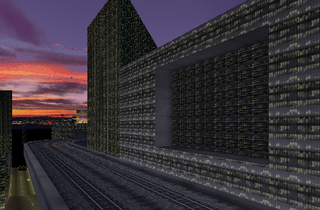 The buildings in Metro Madness and Rooftops look somewhat different from what they're supposed to look like. Even the tower in Airport (it uses the same texture) is affected.

The visual appearance of the Beetles are the same as in Jabo's Direct3D6 1.5.2.

The cause of these issues is unknown. 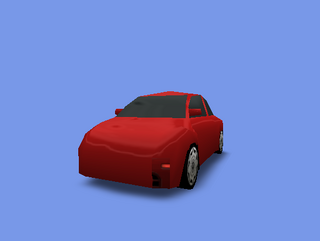 There seems to be some kind of layer that when you are close, it slightly moves. 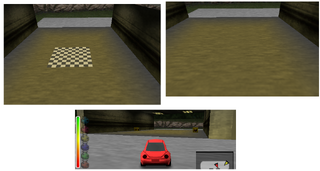